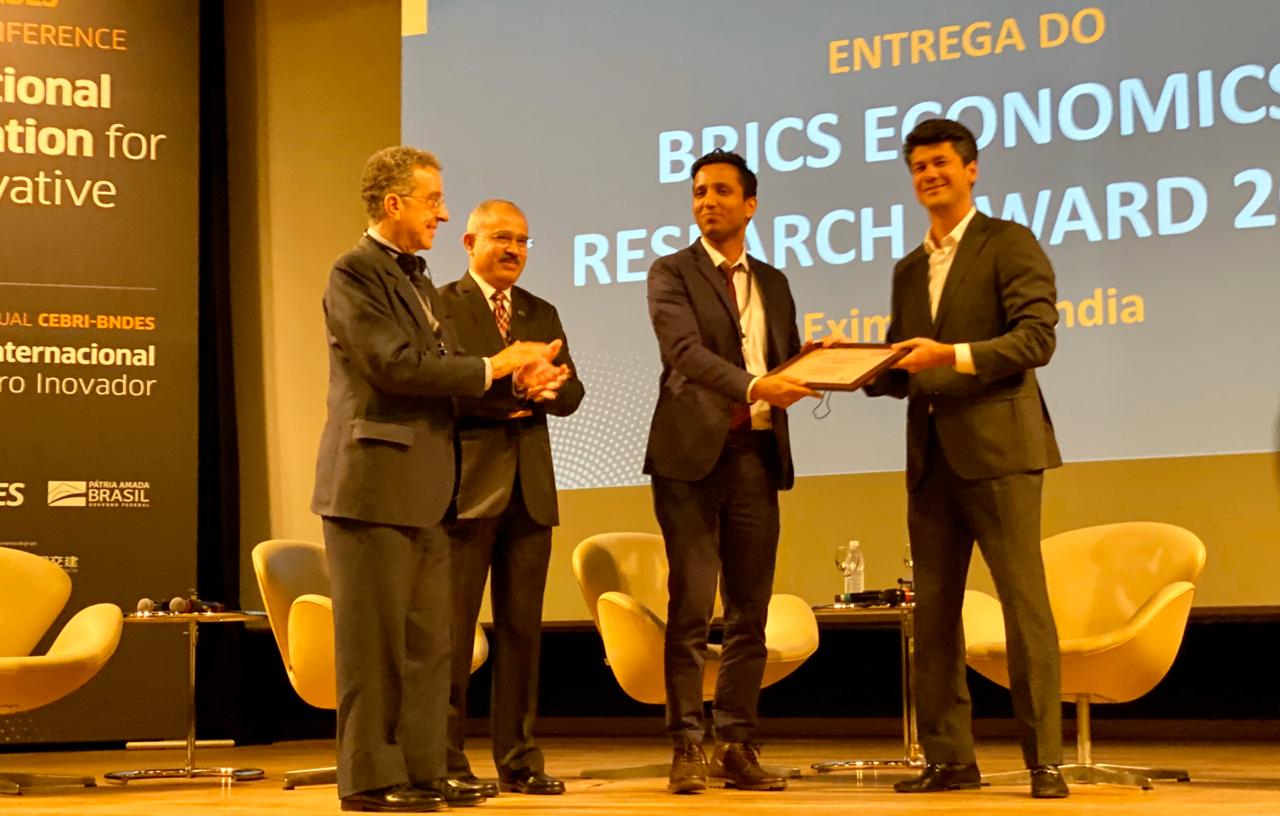 Presentation of Exim Bank of India’s BRICS Economic Research Award 2019 by Mr. Gustavo Montezano, President of Brazilian National Bank for Economic and Social Development (BNDES), to the Award winner, Dr. Tushar Bharati in the presence of Dr. José Pio Borges, Chairman of the Board of Trustees of Brazilian Center for International Relations (CEBRI) and Mr. David Rasquinha, Managing Director, Export-Import Bank of India (Exim Bank), during the 9th Annual BRICS Financial Forum hosted by BNDES together with CEBRI, in Rio de Janeiro, Brazil on November 12, 2019.

Background of the Award

The objective of the Award is to stimulate and encourage advanced doctoral research on Economics and related topics of contemporary relevance to the member nations of BRICS. The Award comprises prize money of Indian Rupees 1.5 million (approximately USD 22,000) sponsored by Exim Bank, a medal and a citation. Doctoral thesis of nationals of any of the five member nations of BRICS, i.e. Brazil, Russia, India, China and South Africa, who have been awarded a Doctorate or accepted for the Award of a Doctorate from any recognized nationally accredited University or academic institution globally, are eligible to participate and receive the Award.

The Award accepts as entries, doctoral thesis written by nationals of any of the five member nations of BRICS, who have been awarded a doctorate or accepted for award of a doctorate from any nationally accredited University or academic institution globally, during the period January 2015 to March 2020. The broad focus of the eligible theses could be International Economics, Trade, Development, and related aspects of Financing, which may also have particular relevance especially to BRICS nations/ member development banks of BRICS. The last date for receiving entries is March 31, 2020.

The objective of the IERA Award is to stimulate advanced doctoral research by Indian nationals in international economics, trade, development, and related financing at universities and academic institutions in India and abroad. The Award consists of a prize amount of ₹ 3,50,000/- (Indian Rupees Three Hundred and Fifty Thousand only) and a citation.

Research work by Indian nationals in international economics, trade, development and related financing (either awarded a doctorate or accepted for award of doctorate) from an university or equivalent academic institution in India or abroad is a pre-requisite for eligibility of the Award. Issues of relevance to India / Exim Bank such as those pertaining to foreign trade, foreign direct investments, joint ventures, international competitiveness, policies impacting trade and investment, monetary and fiscal interventions, among others, would be of particular interest. Exim Bank will accept, as entry, those thesis for which doctorate has been obtained/ accepted for award of doctorate between January 1, 2015 and September 30, 2019.. Please note that the last date for submitting the application for IERA Award 2019 is in October 20, 2019.